Crude oil is hotter this year than the Dow, the Nasdaq and even bitcoin.

It has surged 7% so far in 2018 and hit a three-year high of $64.81 a barrel on Monday, reflecting confidence that an epic supply glut may finally be over because of production cuts by OPEC and Russia.

But is the infamously boom-and-bust oil industry setting itself up for disappointment? Crude is so high that it could trigger a “drill, baby, drill” mentality from U.S. shale oil producers who will once again flood the market with supply and drive down prices.

That’s exactly what happened in early 2017, derailing a rally in crude and setting up months of pain.

U.S. shale producers need oil to be expensive enough to give them incentive to pump, and prices have once again reached that sweet spot.

That would be good news for American drivers. The average gallon of gasoline fetched $2.53 on Monday, compared with $2.34 a year ago, according to AAA. 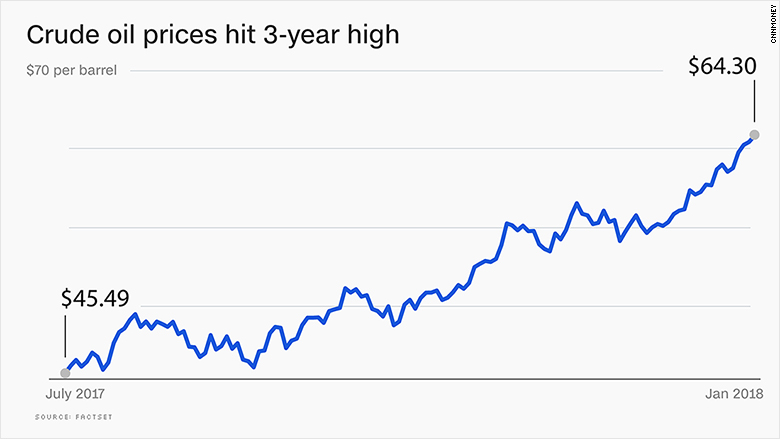 The smart money seems unfazed by the fracking threat and thinks oil will go even higher. Bullish bets on crude oil as measured by the CFTC hit a record high last week, while bets against oil tumbled to their lowest since June 2014, according to research firm JBC Energy.

“No one wants to miss out on this rally,” said Matt Smith, director of commodity research at ClipperData.

But Smith and JBC Energy warned that extremes in financial positioning can quickly reverse.

The bullish bets are a “clear red flag” that could lead to a “snowballing effect” where selling begets more selling, JBC analysts wrote.

For now, the oil bulls are clearly in control. The big driver: Oil stockpiles have shrunk significantly, relieving the overarching concern that caused crude to crash to $26 a barrel in early 2016. U.S. oil inventories have dropped by 13% over the past year, according to the EIA.

The diminished stockpiles make oil prices more susceptible to sudden disruptions in the oil market. Late last year, crude soared because of temporary supply outages in Libya and the North Sea. In the past few years, those types of disturbances had little impact because the supply glut acted as a cushion. 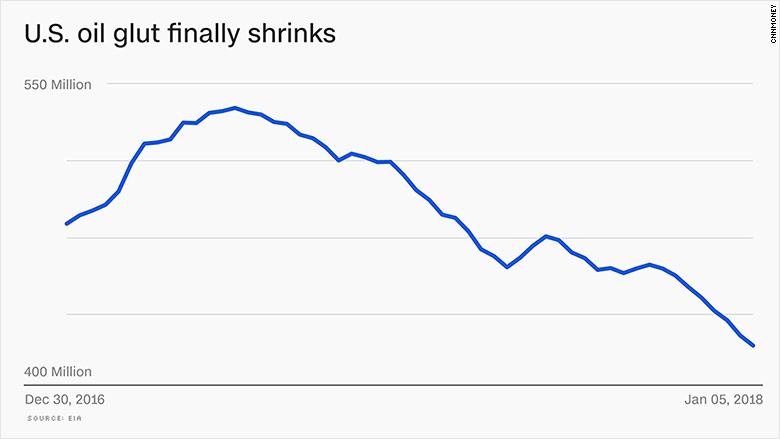 Another positive for oil prices: The appetite for crude oil is strong. The U.S. and global economies are growing faster, driving demand for gasoline, diesel and jet fuel.

Crude has also benefited from a paradigm shift in the oil market. In late 2015, Congress repealed a 40-year ban on oil exports, which meant American producers suddenly had customers around the world to buy their excess supply. U.S. oil exports soared to record highs, further easing the oversupply problem.

Now everyone is wondering whether U.S. frackers in Texas, North Dakota and elsewhere will unleash another flood of shale oil that keeps a lid on prices.

The bulls are hoping that U.S. shale companies have learned their lesson and will show more discipline. They also note that the sharp drop in oil stockpiles means it would take a lot more shale to disrupt the market this time.

After speaking to a range of oil producers, Goldman Sachs analyst Brian Singer said many are signaling caution about ramping up output aggressively. “Most emphasized the importance of discipline,” Singer wrote in a recent report.

JBC Energy, on the other hand, said it expects U.S. crude to “overwhelm the market” once again. The firm pointed out that the Baker Hughes tally of active U.S. oil rigs jumped last week by the most since June.

Each time U.S. shale gets knocked down, Tran said, “it comes back faster and more efficient than ever before.”